I’m often asked how I came to nutrition as a second career. I’ve spent some time reflecting on that question and am grateful for all the nudges – small and large – that the Universe has presented. Contemplating my journey, I am reminded of my mentors. I’ve had many teachers along this path toward nutrition and wellness. There were the traditional university professors. There was my own, abundantly gifted and patient naturopathic doctor. And there was the most unlikely of teachers, my first dog, Charlie.

Charlie, a German shepherd-husky mix, was an incredible teacher on so many levels. But none more so than her gift of launching my journey into nutrition and wellness – for myself and for helping others. 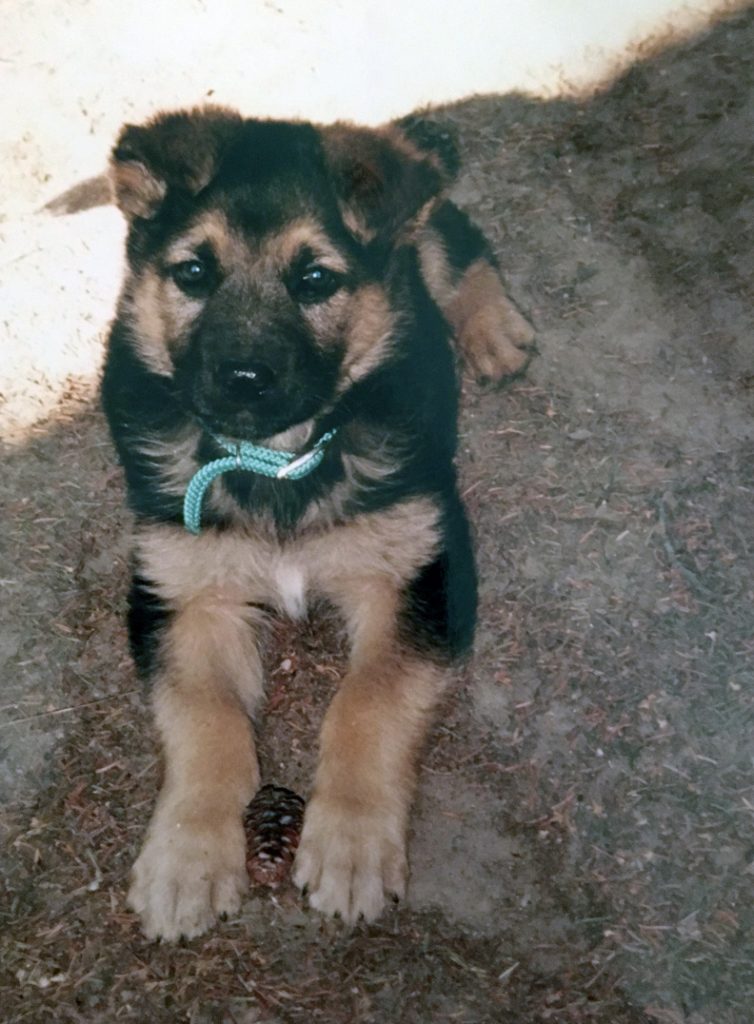 Charlie arrived as a not-quite-weaned
puppy. And when I think back to that Sunday afternoon, Providence was clearly at work. My then-husband and I had bought a house the previous winter when the snow in Fairbanks was deep. And now in May, with the snow melted, we took stock of the mess that was our backyard. First to go was a sagging mesh wire fence. This was my job that afternoon, but just before I began to dismantle the fence, two little girls showed up with a puppy. They told a sad story about why they couldn’t keep her and asked if I wanted to buy the puppy for $20. It was the best $20 investment I ever made. But if I had begun my fence dismantling task, I know I would have turned down the offer.

Charlie taught me how awesome
communication between species can be, that brushing is love and that trust is a
wondrous thing. We traveled many miles together around town and throughout
Alaska.

When she was nine, she developed a
condition called EPI – enzymatic pancreatic insufficiency. Pancreas? I knew we had one but I couldn’t tell you quite where it was or what its function was. And enzymes? What are those and what do they do? Although it was absolutely unclear to me at the time, this was the beginning of my nutrition and wellness journey.

Fast forward a couple of years. I had a rather annoying rash on my face. Had it been anywhere else on my body, I probably wouldn’t have sought medical attention. But it was on my face, right? The dermatologist put me on a month-long course of antibiotics. She didn’t mention the need for probiotics and I didn’t yet know of the importance of repopulating the gut with beneficial microbes after the antibiotics swept through destroying all the microbes present. I quickly developed a bacterial infection called Clostridium difficile, that wouldn’t be diagnosed for nearly a year. With treatment, I recovered. Life went on, but I could no longer tolerate glutinous grains (wheat, barley, rye and spelt) and dairy had become problematic, too. These sensitivities remain with me today.

It would still be nearly a decade before I would make a 180° career shift and return to graduate school to earn my Masters in Human Nutrition. There I would learn the mechanisms by which antibiotics predispose the gut to colonization by the C. diff. bacteria (among a host of other digestive ailments) and the subsequent setup for food sensitivities. I will admit that I spent some time (years actually) harboring anger toward that dermatologist.

But in time, I found myself being gently reminded from various people, books and conversations that every experience is
a gift. I began to reframe my story of being “wronged” in my mind. It was not immediately apparent what the “gifts” were though. But I persisted in considering that there were gifts and slowly they came into focus for me.

Being intolerant of wheat presented me with some challenges that I rather reluctantly embraced. It allowed me to learn about alternative flours and experiment with them. My culinary repertoire expanded. I became aware of the nutritional benefits of nut and bean flours vs. traditional wheat flours and I became good at gluten-free baking. I now teach gluten-free baking and cooking classes at the local community college. This is a role I cherish.

The experience of being gluten and dairy intolerant also presented me with the opportunity to ask for what I wanted. This was in contrast to a belief I took away from my childhood – one in which it was not acceptable for me to really ask for what I wanted. I’m not sure whether I intuited this belief as a teaching or I incorporated it on my own. But it became clear that it was an unconscious belief that needed restructuring as it became a necessity for me to ask for what my body needed. This was especially the case when dining out at friends’ homes or in a restaurant. And this aspect of asking for what I wanted began to extend to other aspects of my life as well.

So, my journey into the role of nutritionist and wellness coach was a slow but persistent one. A journey filled
with indelible teachers in the forms of professors, doctors, a canine and some unproductive beliefs. Do I ever wish I could just eat wheat and dairy again? Sure! It can be challenging and rather inconvenient having to adhere to and insist upon these dietary restrictions. But growth is an ongoing process. And I am grateful for the continued opportunities daily life and my clients present.

What special gifts have your life events contributed to your experience?